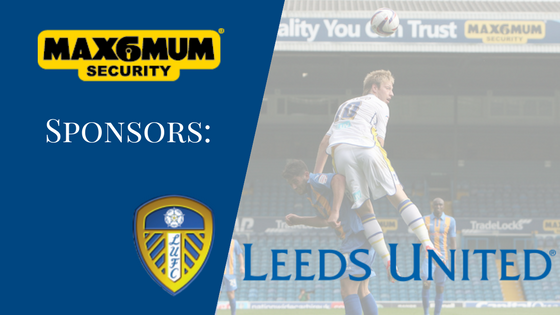 We are the official sponsors of the Leeds United scoreboard for the second year running! At Max6mum Security we like to show we are good sports by supporting sports teams in the North West of England.

The Max6mum Security and Leeds United partnership is one that goes back quite far back. In 2012 when the brand first launched we became the official sponsors of the clubs south stand, with adverts in the home game programme and on the website.

Now the Max6 logo can be seen not only on the scoreboard, but on the team sheets, the Leeds United official calendar and our adverts are featured in the match day programme. Leeds is one of the biggest sports clubs in Yorkshire and with over 25,000 Leeds fans at every Elland Road home game, that’s great exposure for the brand. Leeds united games are featured in national and regional press more than any other club in the division and games are often broadcast on TV.

Of course Leeds United isn’t the only team we support, as we are also the official sponsor of professional local netball team Manchester Thunder.

Here at Max6mum Security we are taking a different approach to marketing. Everyone needs good quality and affordable home security – fact. Manchester Thunder and Leeds united fans attending matches alone amounts to well over 32,000 people in the North West of England. Thunder had over 600,000 viewers of their games on Sky Sports last year and Leeds are no stranger to both press and game coverage. We are not only showing we are good sports, but we are also reaching out to mass audiences.

For more information about how you can stock Max6mum Security at your trade counter or store call 0161 796 7268.